This was my stage-costume for Genki 2013, and I must say... It's been some project. I've tried A LOT of new things, learned a lot about does and don'ts, and also how much I hate making frills.

I will say sorry for the very choppy WIP pictures, since I just snapped randomly during the process.

There's around 4 different variations of Madokami, with slight detail variations, which can pretty much make or break a costume, I decided for a mix between the simple and detailed, with the picture below as my main reference. 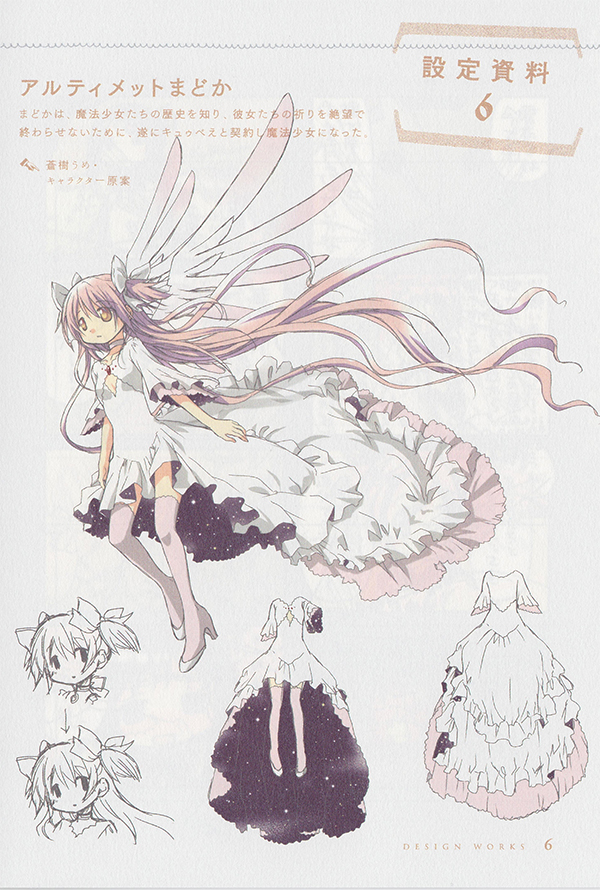 Knowing this would be a costly project, I had my Mustache-lover help me plan out HOW MUCH fabric I'd actually need (down to the last centimeter). 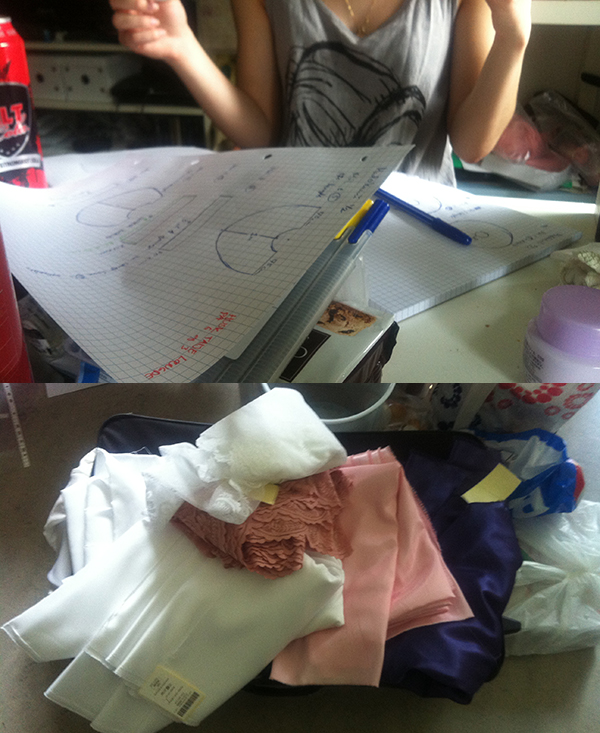 I started out cutting the circles and because they had to be so huge, I actually ran out of newspapers and had to resort to some old schoolwork to make my pattern. I felt very crafty. 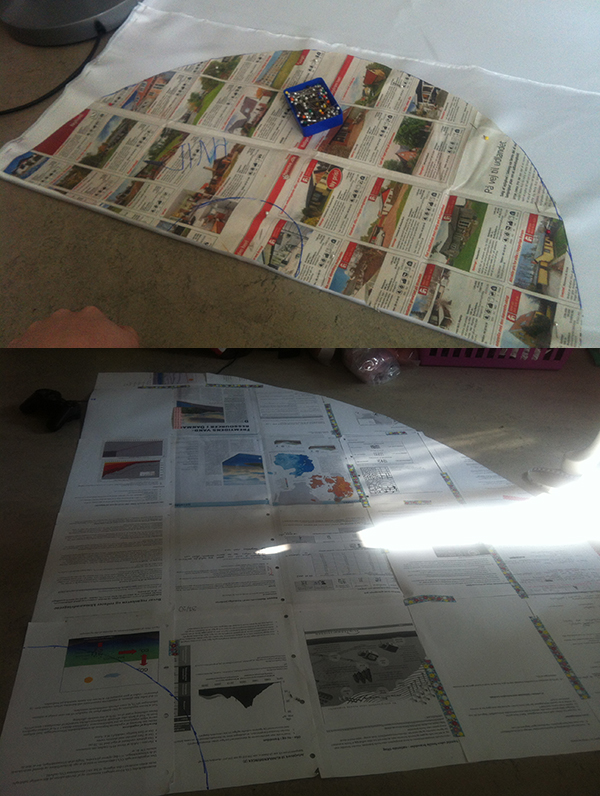 The inside of Madokami's skirt is portrayed as a starry night, which meant making around ~30 meters of random galaxy pattering. It took me around 3 times 8 hours to make all the printing on the final costume. 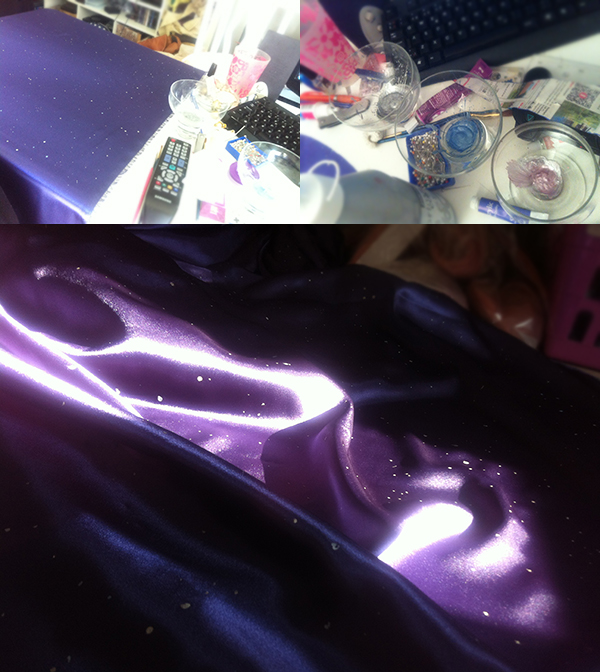 This is the long skirt with attached frill and lace detail. Even with the frill pulled up, it still manages to take up most of my free floor space. 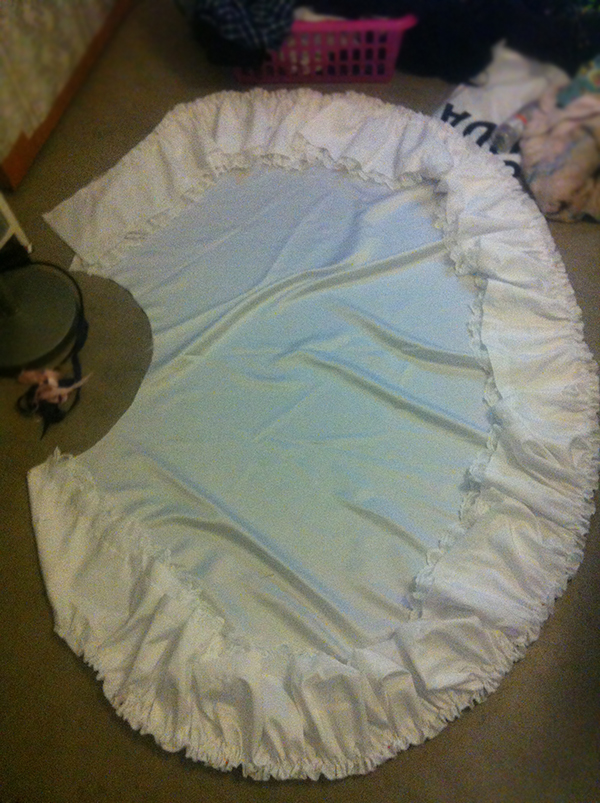 The sleeves also got a round of lace, which was such a bitch to put together, and I even had to remove around half of the circle in the end - But this is how you learn your lesson. 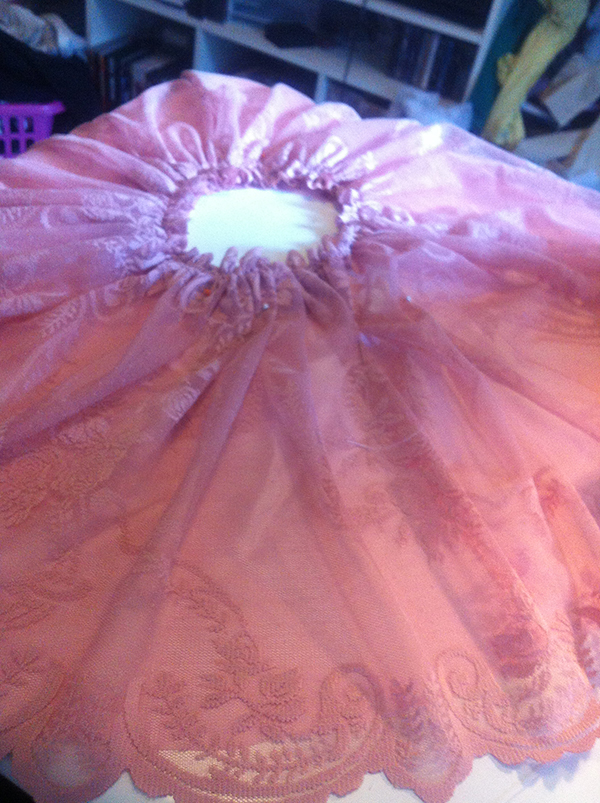 I had a lot of problems figuring out how to make the socks and decided on doing it with the same fabric variation as for the other pink parts. The only problem with the fabrc is that it's completely non-stretch. Making it a bitch to work, when it comes to a bodypart as shapely as the legs.
Though I must say, I DID like the end result, and they worked out fine at home, but broke the first time I sat down at the con. - So that's another re-do. 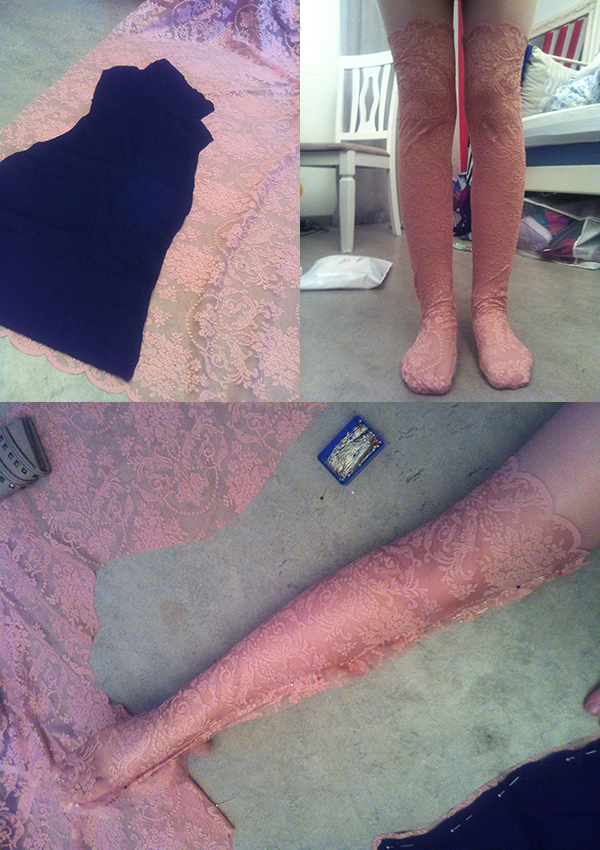 Then came time to attach the inner frill, I waited a long time with this, because I had a lot of different ways I wanted to attach this, but ended up attaching it seperately from the inner circle.
This is also a prove that a Singer can sew through 8 layers variated fabric. Not to shawwy I must say. 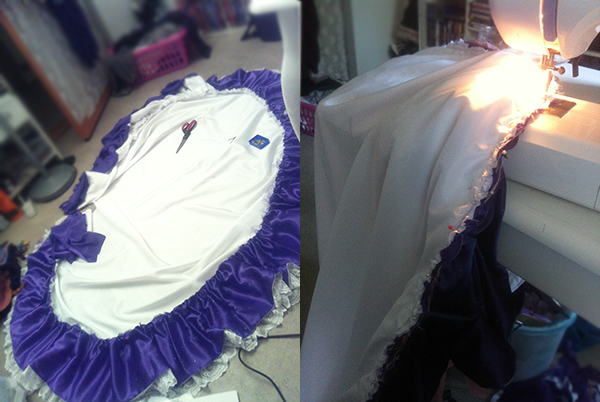 The top. This was the WORST part to make, since the zipper I bought was too short, which made it even harder to make a tight fit, since I had to be able to get it over my shoulders, and also making it fit around the chest, something I've never done before and actually needed help from a friend to do this properly.
I feel like I could've done this much better, but at this point I was under time pressure and it wasn't time for re-dos.
The smaller circle also got attached and I'm very happy that the triangular parts worked out as I wanted, since I think it's a cute-point of the design.

Adding the full frill on the top part, which looked surprisingly small, compared to the huge bottom skirt. 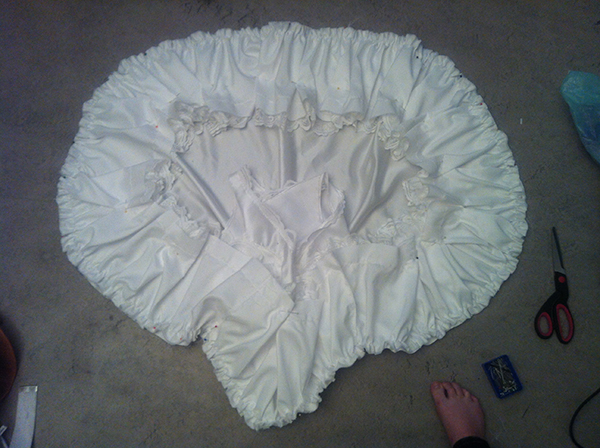 A shot of how the two skirts should look like together in the end. 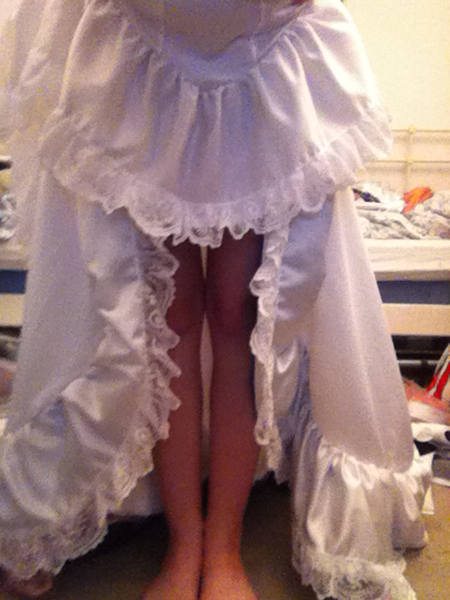 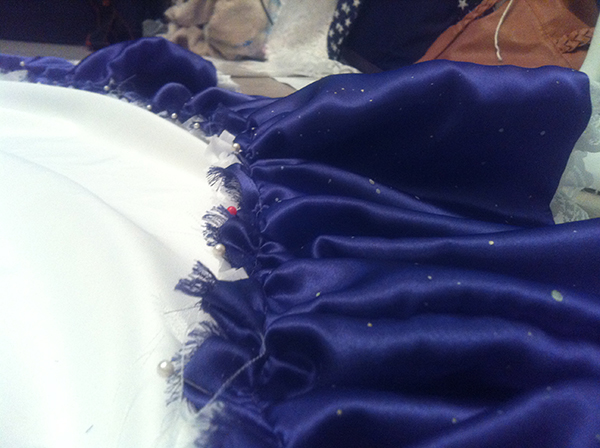 Since I DID NOT want a tough crioline or bustle for the skirt, but more like a flowy cloud, I made a 'net' with leftover lace pieces and attached a lot of compressed tulle. 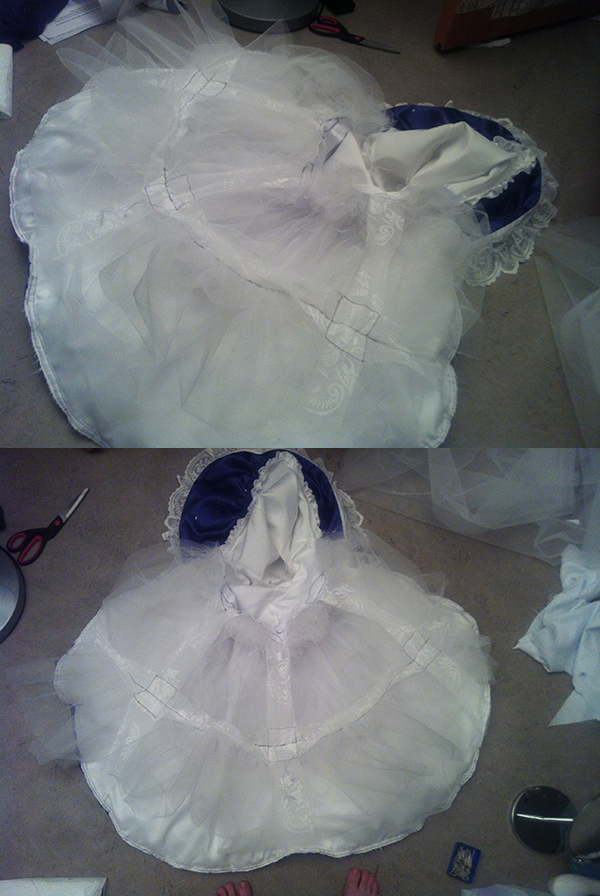 Attached the inner circle and turned the top part inside out. It turned out a little more bumpy than I wanted it to, but it's an easy fix, and not as noticeable when wearing the big skirt.
I was very happy that it worked as a 'shorter version', much easier for convention wear! 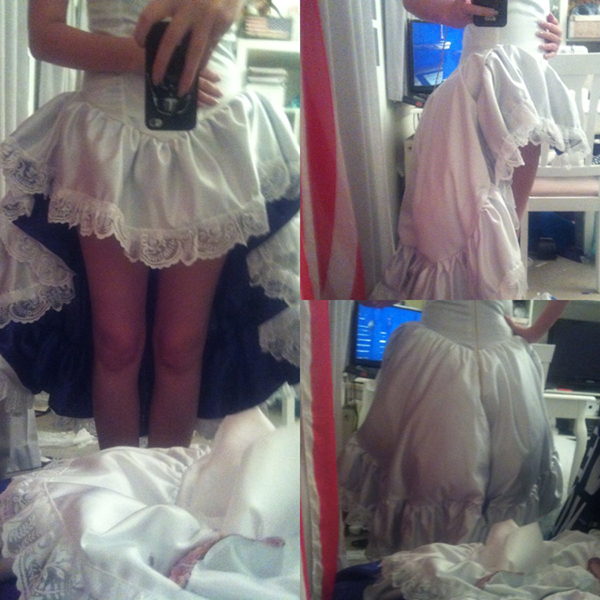 And here's a better view of the netting that I made for the big skirt.
The top fabric 'halfcircle' is there to stabalize the skirt, and help it move easier with my hips. 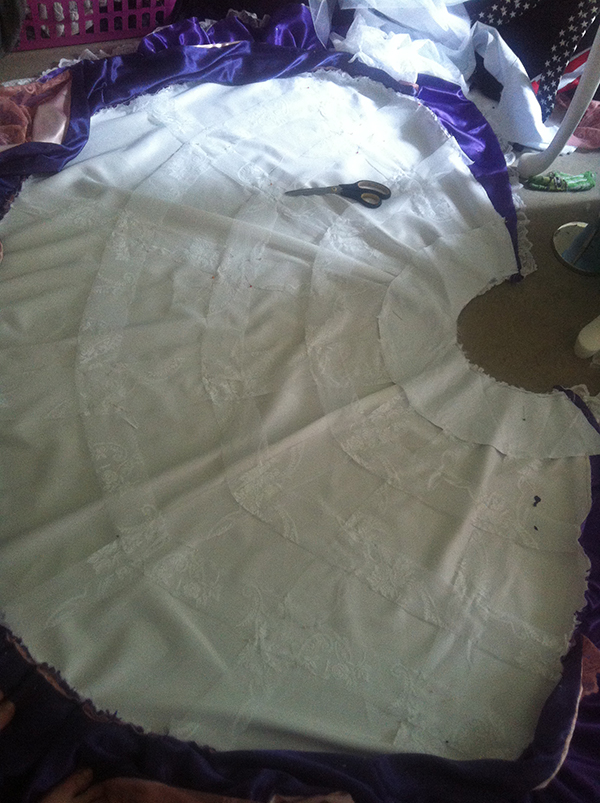 And then stress took over and I didn't get more pictures, so here you go, some snapshots my friend took of me and my lovely Kyubey at the convention :3 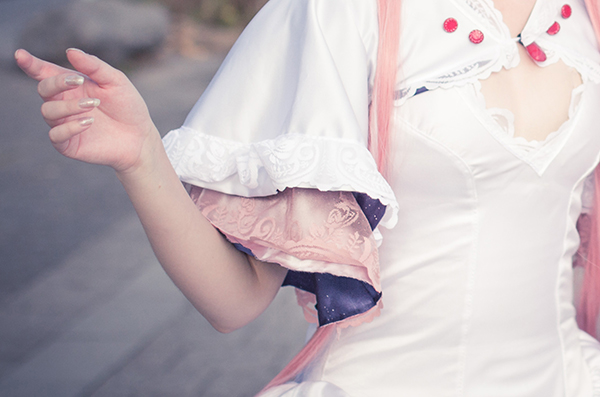 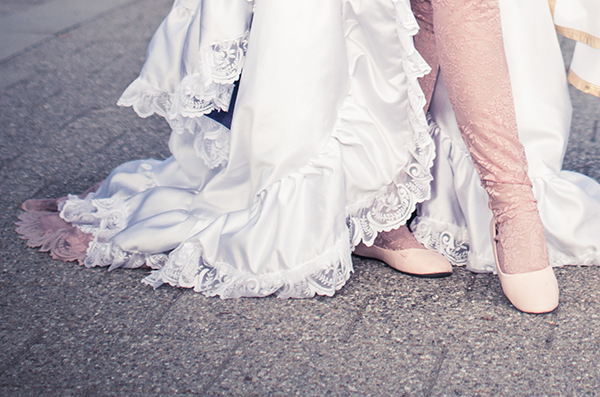 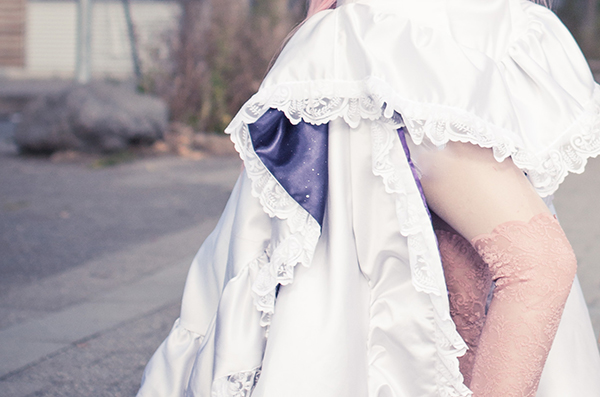 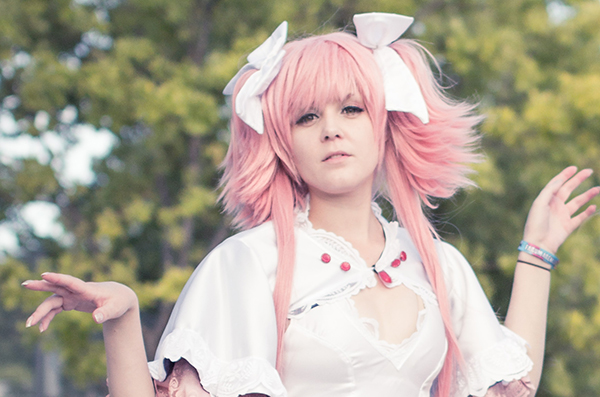 PmMm: Remembered by *KamiRenee on deviantART
Posted by Kami Renee at 4:23 PM The name is Kami Renee, I'm 23 and have been cosplaying for around 6 years.
This blog is for everything I do that is cosplay related; videoes, photoshoots, thoughts, work in progress, and so on.